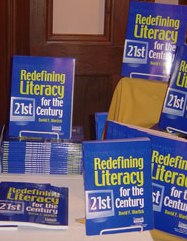 Redefining Literacy for the 21st Century, by David Warlick

In 2004, Linworth Publishing Company released Redefining Literacy for the 21st Century.  They had come to me more than a year earlier to write a book about technology for educators, and, being so flattered, I agreed.  However, as I commenced researching and planning the book, I came to realize that it was not technology that was impacting the work of educators nearly so much as the changing nature of information.  What we read was changing in..

Discussing this with my editor, Donna Miller, we concluded that what was needed more than a book about technology, was a book about literacy, and how our notions of literacy are affected by an increasingly digital, networked and information abundant (overwhelming) world.

To set the stage my first chapter was a story, set in a middle school in 2014.  It was perhaps more of a thought experiment for me, imagining the technologies that would almost certainly be available in schools in 10 years and then learning how they might be applied, by telling a story about the school’s students, teachers and community.

Here is the story’s introduction.

This first chapter is a work of future fiction. I do not call it science fiction, because I have every reason to expect that schools can change this much, and that it could happen during my career. If they do not, it will not be because the technology is not available, but because we did not have the courage or vision to make such dramatic changes in the way that we prepare our students for their future.

Some of what you read in this short story will seem unbelievable. However, if you are aware of the advances in computers and networking over the past ten years, it will not be the technology that surprises you. It will more likely be what learners and educators do while they are engaged in teaching and learning. So let us remove the veil of our own industrial age upbringing for just a few minutes and see one possibility. Welcome to The Bacon School, 2014.1

My next few blog entries will be a serialized version of that story.  I want to thank Marlene Woo-Lun for helping me to get permission from ABC-CLIO to republish this chapter and also for helping in the second edition of this literacy book, Redefining Literacy: 2.0, published in 2008. I’ve been working through a major overhaul of Class Blogmeister and as a matter of reference, just pulled up its Google Analytics report.  There were few surprises, such as a decline in its use over the years — which I was actually encouraging for a time.

What did surprise me was a review of the operating systems that were accessing the 10 year old classroom blogging site (see below).  Windows continues to hold a substantial lead with 57.33% of the hits.  But second and third are what caught my eye.

iOS has overtaken Macintosh OS for the number two spot.

..and then there was a not-to-be-ignored 6% for Android.

I guess what truly strikes me is that CB is essentially a data-entry activity, if I might be forgiven for using such an archaic term.  It’s about typing.  What sorts of subtle biological evolutions are going on, that our children can type so much on an often hand-held glass surface? 😉

It’s been a busy few weeks, with the holidays and then a wedding – the first of our siblings children to tie the knot.  Also consuming no small amount of my time was the shinny new and cuddly MacBook Pro we bought for Brenda just before the end of the year.

A new computer and operating system (Mavericks) thrills me.  New opportunities, and new and interesting ways of doing things, working, learning and playing.

But Brenda doesn’t look at it that way.  We compliment each other in so many ways.  I strive for the new and unpredictable, while she holds to certainty and the traditional.  I’m smart enough to know that she’s smarter than me, so — it works.

And, so, I’ve been working to make her brand new MacBook Pro behave exactly the same way that her four-year-old white MacBook did – with a few unavoidable exceptions.

Her copy of Intuit’s Quicken  which she uses to keep our books, would not run on Mavericks   She stopped upgrading Quicken, when the software dropped its check-printing feature in 2006.  And so, converting her data from 2005’s Quicken, to the new Quicken Essentials, was not going smoothly.  In fact, my research indicated that it couldn’t be done.

To get a second opinion, I called their tech support, and, after only about five minutes was connected to a young man with a delightfully exotic accent.  Not a problem. I love accents, even though my particular hearing disability makes interpreting them difficult for me.  The problem wasn’t his accent.  It was that he was determined to answer a question that I was not asking.

I won’t go into detail, except to say that my research, prior to calling, informed me that there was a particular obstacle to upgrading from any version older than 2006.  He seemed not to hear that part of the problem and insisted on the standard upgrade process.  As that continually failed, he would leave the phone for increasing periods of time, coming back only to suggest something else that I had already tried before calling.

I gave it an hour and a half, open to the possibility of a sudden and surprising solution, but then apologized and disconnected to make a 5:00 appointment.

The young man was working from a script, based on a set of expected and well understood problems, the solutions for which he had been thoroughly taught and tested.  I understand the approach.  It’s inexpensive, qualifies as successful training and probably solves a sizable number of predictable support problems.   However it is useless for unexpected and difficult to understand problems.

..and here’s the moral of my story.  If the last sixty-some years have taught me anything, it’s that most of what we experience in the future will be unexpected and difficult to understand and that much of what we didn’t expect and struggle to understand will actually reveal priceless opportunities.

We serve our future by drilling our children on facts and prescribed processes and testing their recall ONLY if it’s the picture above that that we expect for them.  Our children need to leave our schools practiced in a lifestyle of paying attention, evaluating, thinking, adapting, inventing and finding value.

I fear that this testing madness has already quite nearly ruined one generation.

We all now that a sprinter and a long distance runner will both train in different ways, but maybe not exactly why and how. This video does a great job of showing us the different kinds of muscles we can work out and how they help us. 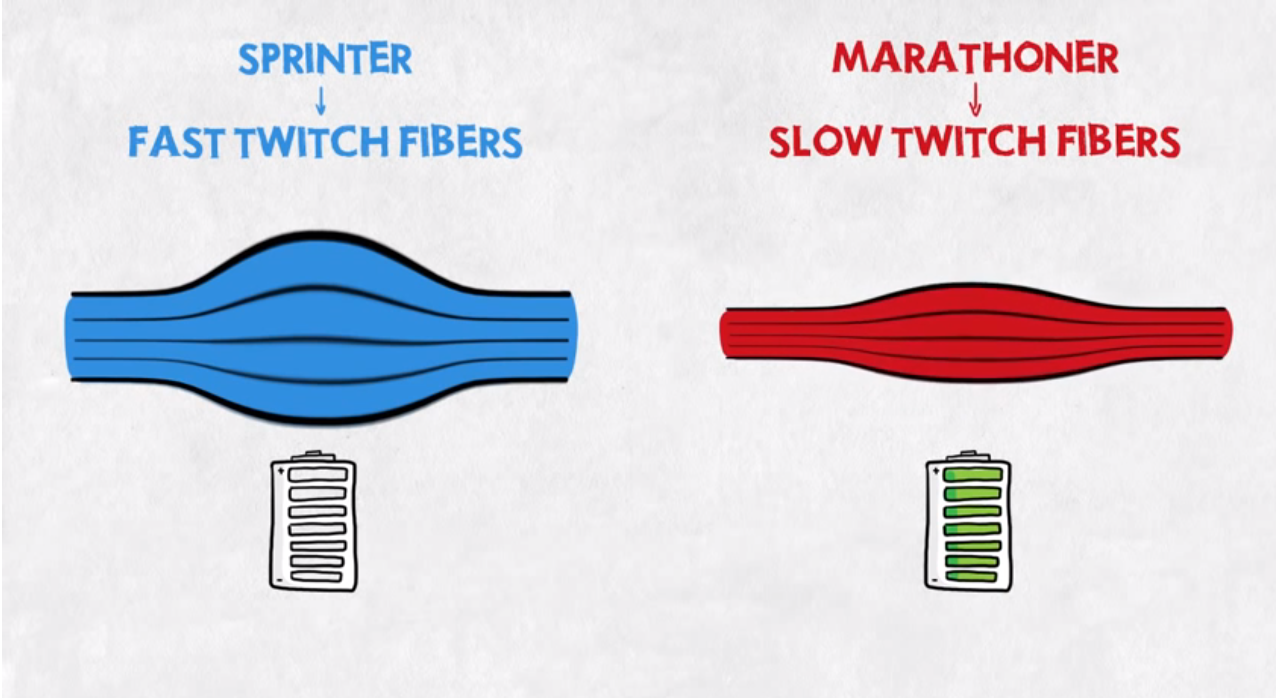 We all now that a sprinter and a long distance runner will both train in different ways, but maybe not exactly why and how. This video does a great job of showing us the different kinds of muscles we can work out and how they help us.

Phantom traffic jams have the unique effect of both fascinating and infuriating me. I always knew there had to be some pseudo-scientific or mathematic reason for it but I never took the time to figure it out. Thankfully last night I stumbled upon some videos that explain the very phenomenon. This is the kind of […] 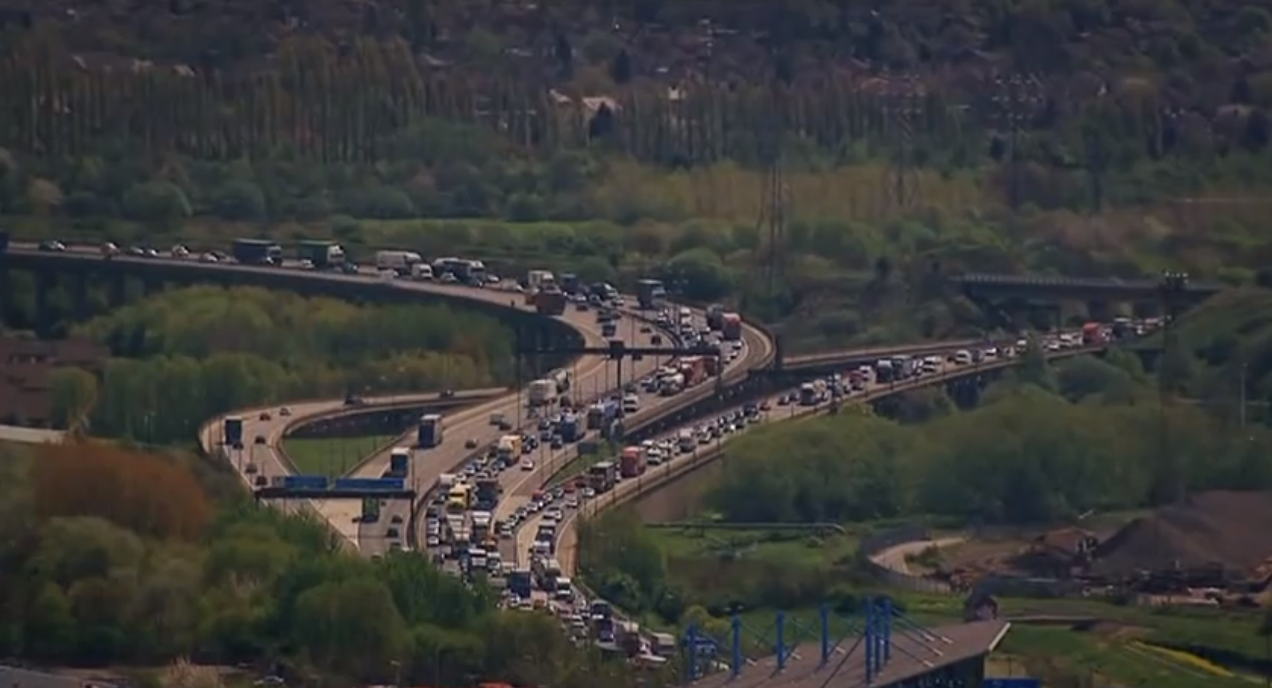 Phantom traffic jams have the unique effect of both fascinating and infuriating me. I always knew there had to be some pseudo-scientific or mathematic reason for it but I never took the time to figure it out. Thankfully last night I stumbled upon some videos that explain the very phenomenon. This is the kind of stuff they should teach in driving class so people don’t lose their minds on their morning commutes.

This has got the be the most mouth-watering learning experience I’ve ever had. Enjoy this very thorough explanation of how exactly we get from dough to cookie on a scientific level. Embed This Video 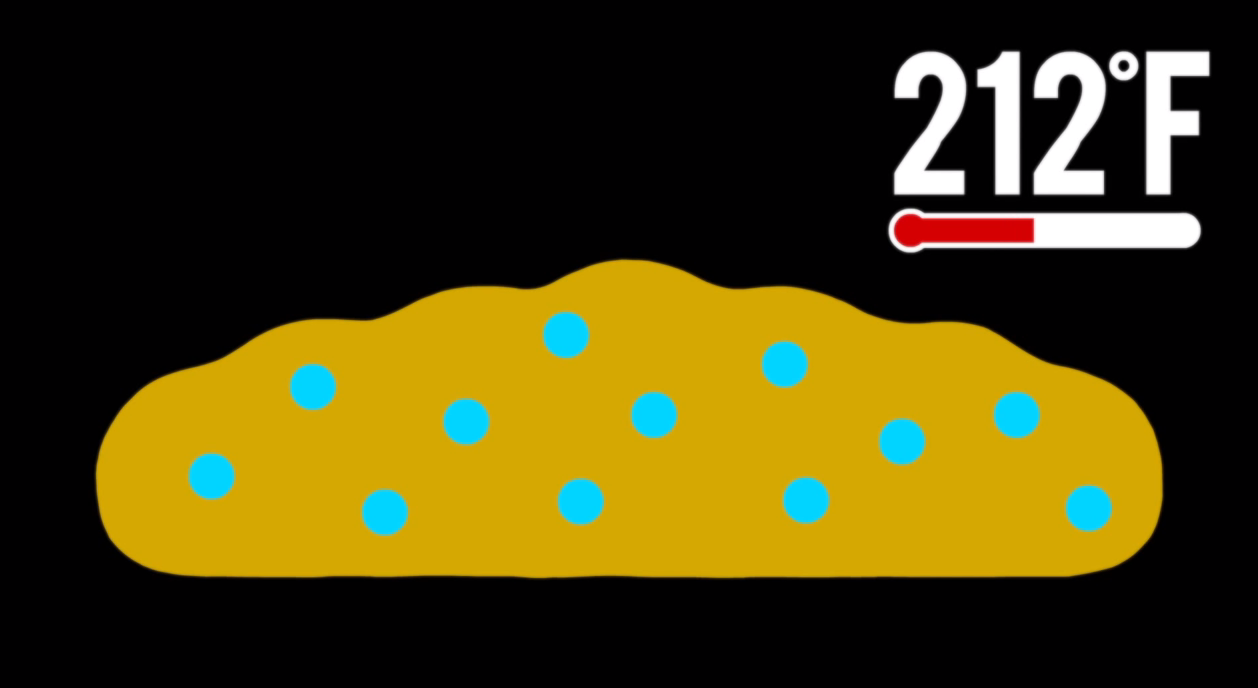 This has got the be the most mouth-watering learning experience I’ve ever had. Enjoy this very thorough explanation of how exactly we get from dough to cookie on a scientific level.