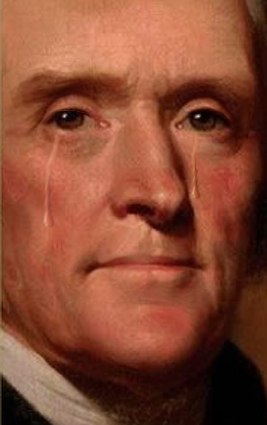 I take this kind of disappointment personally. I should have done more.

I also voted with my checkbook, writing checks to my candidates’ campaigns – probably more than was fair to my family.

But, my checks can’t compete with those from millionaires, billionaires and huge corporations.

The sad thing is that according to exit polls, most Americans seem to side with the positions of Democrats’ on many of the actual issues.

Yet this election was not about issues.

This election was about volume. ..and volume is $bought$ before the voting begins.

This election happened in dark rooms where checks were written, adding zero after zero, with the expectation that the writers would soon be legally freed from many of the consequences of acting to add many more zeros to their bank accounts.

I wonder now if this was the intent of our “Founding Fathers.”

On this election morning, I am reminded of the second half of Jeff Daniels’ speech in the the first episode of “The Newsroom.” Here’s my slightly edited version…

We waged wars on poverty, not poor people.

We sacrificed, we cared about our neighbors, we put our money where our mouths were, and we never beat our chest.

We aspired to intelligence; we didn’t belittle it; it didn’t make us feel inferior.

We didn’t identify ourselves by who we voted for in the last election, we voted for the best government, not the most or the least – and we didn’t scare so easy…”

If you vote today, vote for the aspirations of our original patriots, not those of the corporate CEOs and boards of directors, who camouflage themselves with terms like patriots and TEA party.