I’m sitting here with my first stack of books for giveaway and thinking about why I called it, The Days & Nights of a Quiet Revolution. There’s nothing in it about education or even technology. I admit that many if not most of the participants in my workshops and audiences of my talks walked away thinking that it was about technology in education. That’s my failing. Educators, perhaps more than most professionals, are hyper focused on methodology of their job. When you have 20 to 40 students in your classroom, some of whom might be just as focused in disrupting your methods, big picture is a sky away from your notice.

I, on the other hand, spent my 40+ in education as a classroom teacher, a district administrator, part of a state-wide support staff and a parent. This gave me a unique perspective that encompassed both the day-to-day of classroom instruction, and the larger concerns of the why of education.

To be sure, it has not been a technology revolution, an idea that was difficult to convey to practicing teachers.  I would stand in front of my audience and illustrate some technique that empowers learning by demonstrating a trick with my computer.  Teachers, whose computers had been dumping into their classrooms and told to “integrate technology,” would see me demonstrating technology.  The fact is that I was talking about a different way of education, one that goes back to Socrates and more recent education philosophers (Jean Piaget & John Dewey) – required reading for all practicing teachers.  It’s an education that empowers students to become fearless and resourceful learners.

What better thing for students to become in a time of rapid change, but fearless and resourceful learners.

There were many of us mapping out new modes of teaching and learning with these new tools, and sharing them widely – and mostly, we did it during the days and nights of our own time.  The index of my book includes a pretty good representation of their ranks, though not nearly complete.  We were disrupters, and many teachers resisted our disruptive ideas, as they thwarted disruptive behavior in their classes.  They resisted giving their students access to computers and the internet because they felt a loss of instructional control in their classrooms.

But many times I watched the most resistant teachers become the most creative users and enthusiastic advocates when they realized the potentials of technology as a flexible learning tool.

The greatest and most persistent force against our quiet revelation was not resistant teachers.  It was a vision for computerized education held by an emerging education industrial complex.  They were companies that saw the computer as a tool to better administer instruction on students, and they saw a market for products that could do that.  Before 1990, companies were selling packaged technology solutions that included columns and rows of computers, equipped with software that drilled students in math and language arts, and required procedures, from which teachers were told not to deviate.  All students were marched into and out of the computer room, regardless of their need or learning style.  It irritated the kids, frustrated the teachers and disappointed administrators when they found that the rapid gains shown by the product were always short lived.

That was the late 1980s.  Attempts to turn our classrooms into a marketplace and our children into compliant vessels continues, helped along by government legislation.

Too many of the blog articles and political ads that we read fail to cite the sources for their information. FiveThirtyEight not only describes their sources, but in this case they have provided a link to the source dataset that they used for the analysis.  They encourage us to look at data that describes the Democratic primaries, and draw our own conclusions.

In a recent FiveThirtyEight podcast, the data journalists looked at data related to 2018 primary elections to determine who Democratic voters are choosing this year. That particular episode segment is written up on their site as “We Researched Hundreds of Races. Here’s Who Democrats are Nominating.”

They only considered new candidates, seeking to avoid the messy influences of incumbency. Among other things, they found that women won 65% of the races that included at least one man and one woman.  Male candidates won only 23% of those races.

In fact, all else being equal, being a woman has been worth an additional 10 percentage points over being a man in the open Democratic primaries (they) looked at.

Women candidates also tended to have more experience as elected officials than their male opponents. Such are the complexities of the political game. Conroy also wrote that said that what was important about the increased number of women running for office, win or lose, it will serve to encourage more women to run in future races.

The candidates’ Ideologies were measured by who endorsed them. Those endorsed by the Democratic party establishment did the best, by far. This contradicts the notion that Democratic voters are shifting far to the left.

That said, it is worth noting that candidates endorsed by more left-leaning organizations did not do poorly. This included “Our Revolution” (associated with Bernie Sanders) and the Progressive Change Campaign Committee.

The Days & Nights
of a Quiet Revolution

Most practicing teachers have never taught in a school without computers. Yet it was only a few years ago that the earliest machines started to appear in a few classrooms. These scattered Atari, Radio Shack and commodore computers were barely noticed by most educators.

A few, however, recognized these rudimentary data processors for what they represented, machines with which we could program new interactive learning experiences that would turn our students into explorers and discoverers of knowledge.

These education revolutionaries set about embracing the emerging computer and network technologies, experimenting, discovering, inventing and sharing wondrous new ways to ignite learning. We were empowering our students to act as agents of their own educations and helping them to cultivate the learning-lifestyles that will be critical in their rapidly changing futures.

This story is about thirty-five years of disruptive new technologies that challenged education, an institution that, by design, resists change. It also celebrates the heroes who passionately sought to understand these new technologies and use them to promote schools that empowered learning, instead of administering it.

This story is about thirty-five years of disruptive new technologies that challenged education, an institution that, by design, resists change. It also celebrates the heroes who passionately sought to understand these new technologies and use them to promote schools that empowered learning, instead of administering it.

David Warlick has been a classroom teacher, district administrator and staff consultant for the North Carolina State Department of Public Instruction. Since 1995 he has worked as an independent provocateur, developing popular interactive websites, writing for magazines and journals, and authoring four books and an influential blog. He has also traveled and spoken to audiences on five continents promoting a vision of education that empowers learning with contemporary information technologies.

A Quiet Revolution is written for: 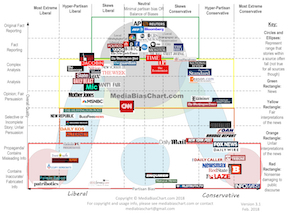 This Media Bias Chart is maintained by Vanessa Otero at mediabiaschart.com

A friend of mine just questioned me on Facebook, “(With) the increase in access to media/information … are people more adept at separating fact from fiction or are they more willing to let others make that decision for them?”

I quickly made a snide reference to recent elector events as evidence, but continued by blaming education.  There is so much about the ways that teachers must teach that actually discourages students from critically questioning the information that they encounter.  We (educators) teach them to learn and believe what it is that we teach and not to question what they have learned.  Teachers are forced into this mode of instruction because schools have become a one-right-answer world.  It is because of high-stakes testing and teachers are responsible for their students knowing those one-right-answers.

But what if critical evaluation of the information we encounter really was a core part of what we teach.  Here are some ways that teachers might encourage their students to develop critical habits.

Tell your students that the world as we know is,

Is not the same world the we knew.

What more, it’s not the same world that we will know.

They (your students) are going to be the explorers and discoverers of that world.

I save the text of my book as a FTP file and upload it to the publishing site I’m using.  The site then displays the book, as it should appear on paper, and I turn each page with the mouse, making sure nothing has gone wrong with any of the text formatting, graphs or images.  If that’s OK, then I purchase a proof copy of the book at a discounted price. A week later the book comes in the mail and I go over it, page by page, looking for any problems. I don’t actually read the book again.  Any typos that have made it through all of the re-readings I’ve done, are welcome to stay as far as I’m concerned.

I did, however, take the time last week to re-read the bio, which was the last thing I wrote before starting the publishing process. “Buzzer,” I found a problem.  I had gotten “twentieth” and “twenty-first” centuries mixed up.  That would have had people scratching their heads.

I also found where an image had slipped and was covering up exactly one paragraph of text – completely.  I don’t remember how I found it – and the book really could have done without anyone ever reading that particular paragraph.  But shift of text would have been repeated on the following pages, which could have rended the table of contents and the index inaccurate.

I’m waiting now, by the mail box, for what I hope will be the last proof copy.

This was my original cover idea. Then I decided it was too dark, and opted for something lighter and with my own art work.

I started working on the book in 2014. It’s short title is A Quiet Revolution, and it chronicles the 40+ years I have spent as an educator, the last three decades as an advocate of modernizing classrooms with contemporary information technology.

I’m experiencing the last days before publication, fixing problems that the final processes have exposed and polishing the final work.  The problem is that a task like this is never finished.  I re-read and edited the book six times, and I could do it six more times and make as many changes.  I completely changed the cover today.  But I am rapidly committing myself to the publishing.  Until then, I want to share some of the promotional text that appears on the back of the book and other places.

This is some text that didn’t make the final cut, so I’ll place it here.

This story is about thirty-five years of rapid change that have challenged education, an institution that, by structure, resists change. It is about the heroes who sought to understand and utilize emerging technologies to help their schools adapt. This story celebrates their passion for education, their inventiveness, resourcefulness and their persistent advocacy for schools that empower learning, instead of administer it.

..and the revolution continues.