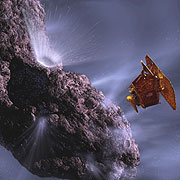 It’s morning, and I’ve finally gotten around to reading yesterday’s USA Today (compliments of Holiday Inn Express). I’m intrigued by the story of a human built space craft crashing into a comet.

On Monday at 1:52 a.m. ET, a probe deployed by a NASA spacecraft 83 million miles from home will smash at 23,000 mph into an ancient comet the size of Manhattan, blasting a hole perhaps 14 stories deep.

Launched in January, NASA’s $333 million Deep Impact mission is designed to answer questions that scientists have long had about comets, the ominous icebergs of space.1

It also intrigues me that it’s just another story. I’m old enough (here he goes again) that I remember, not only when Neil Armstrong step onto the moon, but also when Alan Shepherd was launched into space. I remember Sputnik, and I remember how the world held its breath for just a moment with each one of these events. Now, we are exploring the Solar System, and beyond, and it’s like it is happening in the next town over, and deserves little more attention.

OK, we’re here at the National Educational Computing Conference, where tech-saavy, forward-looking educators from across the country and around the world are talking about the future of education. Yet, the only place I’ve heard tell of this extraterrestrial event is in the newspaper outside my hotel room door.

OK, we’re busy worrying about more important things, like the fact that the U.S. federal government is willing to pay more to build that small space craft than it is willing to spend on contemporary technologies for its children’s classrooms, a budget that president bush proposes be slashed to $0.

As budget talks continue on Capitol Hill, advocates of educational technology are praising a spending plan approved by the House Appropriations Committee on June 16, which would restore more than $300 million in funding for the Enhancing Education Through Technology (EETT) block-grant program and provide additional spending for a handful of other initiatives President Bush had asked Congress to cut in 2006.2

Yes! We have more important things to worry about!