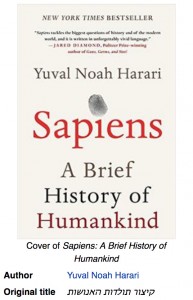 I’ve just started reading “Sapiens: A Brief History of Humankind” by Yuval Noah Harari. Every page teaches me something extraordinary. For instance, for 97% of the time that Homo (humans) have been walking upright, there were several species of human living simultaneously. Homo sapiens, Homo neanderthalensis, Homo erectus, Homo denisova, to mention only a few. It’s only recently, in evolutionary time, that Homo sapiens has emerged as the sole species of human to inhabit the earth.

I just scanned the Amazon description for Harari’s next book, “Homo Deus: A Brief History of Tomorrow,” and these sentences jumped out:

“Famine, plague and war have been transformed from incomprehensible and uncontrollable forces of nature into manageable challenges. For the first time in history, more people die today from eating too much than from eating too little; more people die from old age than from infectious diseases; and more people commit suicide than are killed by soldiers, terrorists, and criminals combined. The average American is a thousand times more likely to die from binging at McDonalds than from being blown up by Al Qaeda.”

It makes me wonder how we’ve accomplished so much to make our world more civil, and, apparently, so little to to civilize ourselves.  Are we worthy of our accomplishments?