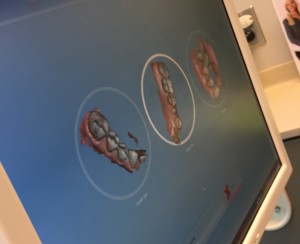 3D Rendering captured with a camera mounted rod and assistive music
I went to the dentist yesterday, for a crown.  I am now using CornerStone Dental Associates in Shelby, NC.  Having used a dentist in the sophisticated city of Raleigh for years, I was not expecting much in this small city.  However, I was pleasantly surprised.  Actually, I was overwhelmed.

Months ago, they identified a tooth with an abscess, which was no surprise to me.  Cornerstone sent me to a dentist in Gastonia for a root canal, since I needed it done right away and they did not have an immediate opening. I’d had a root canal and crown done in 1973 – an excruciating experience.  However, the procedure went well in Gastonia with very little pain, even though the dentist said it was an especially difficult one.

The cool part was the crown.  My dentist first ground the tooth down.  Not fun, but she let me listen to my music.  With that done, she started the process of creating the crown with a rod that had a tiny camera on the end.  Moving it around, she captured images of the tooth from every angle.  To help, a nearby computer played music in a major key.  If the camera was not getting a clear image for any reason, the tune changed to a minor key.  The computer was assisting her with music.  That blew me away.

Once they got the pictures, the computer created a three dimensional render of that tooth (nub), and the surrounding teeth (See picture).  The 3D rendered file was sent to a 3D milling machine, that carved my new crown out of a cube of composite resin.

Some glue and a little polishing and I was done.

All I can say is Wow!