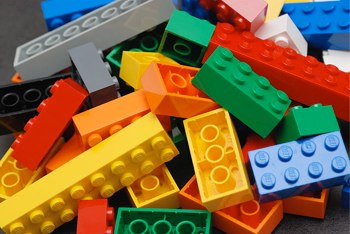 Two 2×4 Lego bricks, of the same color, can be put together in 24 different ways.  Three can be connected 1,060 different ways.  Six can be combined in 915,103,765 different ways.  ..and, of course, children (and adults) have enthusiastically assembled them in nearly as many.  It’s when useful and reliable resources can be used in so many ways that creativity is invited.1

The best use of Legos, in my humble opinion, never involved lessons or even instructions.  You do not sit down and teach children how to creatively make stuff by clicking Lego bricks together.  You simply given them the bricks and let them play.

Might we achieve more inventive-minded students, if we could redesign curriculum to simply give our children the prescribed resources of mind, and then encourage and free them to play, construct and learn.  One example occurs to me, something that I witnessed in Fredericton, New Brunswick, Canada many years ago.

In early 2007, I participated in a provincial conference there and in addition had an opportunity to visit some of the area schools with my friend and NB educator, Jeff Whipple. At the time, the entire province was engaged in some pretty innovative initiatives.  I wrote about that visit here and here.

I was overwhelmingly impressed with everything that I saw in the schools around Fredericton, but the visit that came to mind as I started thinking about Legos was Chad Ball’s civics class.  He had decided to approach it in an entirely different way that year, based on a summer morning brainstorm.  Rather than present the content to his students in teacher mode, he simply made it available to them, the vocabulary and concepts of Canadian government, mostly through a wiki.

Students were then assigned to work in groups, to create a new political party.  They were to develop a platform, write speeches and even establish a mascot and logo – and required to appropriately and effectively utilize every vocabulary word and every concept of Canadian government in the process.  Chad taught in consultant mode, though he reported that he api;d often refer students to classmates who seemed to have a handle on the concept or practice.

On the day of our visit, Mr. Ball had asked, on the class wiki, if there might be ways to extend the project.  Even though the posting initially evoked complaints from some of the students, within a half hour there were 102 comments on his posting, mostly suggesting ways that they might take their political parties to the next level.2

This style of teaching and learning is about empowerment, not compliance,

..and invited to build something.