The conference is over, and I head out to the air port very soon.  Once home, I stay there for nearly a week — while the azaleas are in bloom.  Look for pictures. 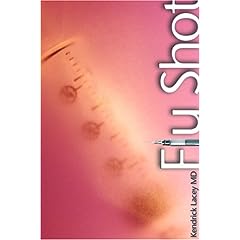 So where did I leave off.  Oh!  Flu Shot.  It’s a book written by Kendrick Lacey about a killer flu pandemic.  Classes across New Brunswick read the book and blogged about it.  Then the author was contacted, and he interacted with the students about the book and about the threat of pandemic disease.  He even did a public reading of the last chapter of the book for the classes over a PolyCom teleconference hookup.

It would be exciting to say that Mr. (Dr.) Lacey was able to interact in these ways from all the way in San Francisco, London, or Paris, but I think its even better to say that Kendrick Lacey worked with these children from a small town north of Fredericton, New Brunswick, just a few miles away.  It’s good that we can connect around the world with the Internet, but isn’t it better when we can use technology to connect to the value of what is local to you?

And then there was Matt Van Raalte, a high school math teacher, who as jettisoned his textbooks for Wikispaces.  All of his students have laptops.  So through Wikispaces, they have access to his presentation slides, his work sheets, and many other resources.  The textbooks lay in a stack in the corner of the room.  One thing that struck me was a sight-impaired student in the classroom, who was reading the materials from the same wiki the other students were using, using the same computer that they were using, but configured to display the material in a dramatically enlarged view.  Nothing special.  Just digital networked information.

Jeff told me that almost without exception the French Immersion classes (classes that are taught entirely in French) score better on their standardized tests.  This is largely because the Immersion classes are self-selected higher performing children.  The exception is Matt Van Raalte’s laptop math students.  Whipple was quick to qualify that Matt is an exceptional math teacher.

From there we went to the BBT lab where students develop a wide array of technology related skills, computer applications, computer aided manufacturing, robotics, etc.  It is largely self-paced, and one of those classrooms that looks far more like a work place than a classroom.  In a small office, just off from this lab, I met two teachers who work in offices, at an array of computers and displays, teaching students as far away as Mexico.  They are distance learning teachers, and one of them teaches three courses in two languages.  I’m still getting my mind wrapped around this.

At the conference, I met Ian Foggarty (sounds like a rock star).  Ian is a physics and biology teacher who has taken on the idea of students as producers.  Rather than giving his students a lab manual for doing their experiments, their job is to write the lab manual.  They are doing it online, and are keen to make it as interactive as possible — and they are willing to go as far as to hire another student to come in and add some flash animations to their project.  They pay him a carton of chocolate milk every day.  They also want to include some user input features, and suspect that this is going to cost at least some chocolate-chip cookies.

I have to mention Jacinthe Robichaud, the Director of Partners in Learning with Microsoft Canada.  She talked to me about the Classrooms of the Future, of which there is one in Philadelphia, and she was especially enthusiastic about the one in Singapore.  She used a term that I found intriguing.  She said that they are after classrooms with soft walls.  I usually refer to classrooms with transparent walls, but the idea of a classroom that you can reshape (I’m talking figuratively) for the need is equally useful.  It is the kind of re-configurable that is critical to adaptive teaching and learning.

Finally, I participated in a breakfast meeting yesterday with David Kirkpatrick, a representative of the New Brunswick Provincial Government.  They (the legislature) are in the middle of budget negotiations, and he asked us (me and several folks from the DOE), why, when they visited schools, teachers didn’t talk about technology.  Kirkpatrick, himself, was obviously sold, but he was looking for a story.  He was looking for that elevator pitch.  And it isn’t easy.  We explained that talking about technology is like talking about chalk, that talking about networks was like talking about hot water.  It’s a tough question to answer.  The reality of it is that modernizing classrooms requires a huge leap of vision, a realization that your economic future depends much less on geography, and more on your citizenry’s access to global information and the skills to work that information.  It’s a golden opportunity for outlying jurisdictions, but will not happen as a result of any single budget negotiation.  It will come from an ongoing commitment to retooling.

It’s been a fantastic trip and now it time to get out to the airport.