These are only a few of the accolades layer at North Carolina’s capital and surrounding Wake County.  So why are the county’s teachers resigning from their jobs in record numbers this year, a 41% increase over last year’s mid-year resignations, according to an April 17 article in the News & Observer. 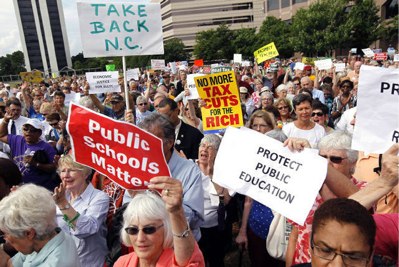 In a recent press conference, held at Underwood Elementary school, district leaders reported that  612 of the county’s 9,000 teachers have resigned during the current school year (that’s 1 out of 14 teachers).  By this time last year, only 433 teachers had resigned.  The most mentioned reason in the News & Observer article was money.  North Carolina is 46th in teacher pay.  Teachers in this state have received one raise since 2008.

The upcoming Speaker of the House, of the “most arrogantly conservative state government in the country,” Paul Stam, wrote in an email message that, “There is nothing particularly alarming in this report, other than WCPSS cherry-picking numbers to fit its narrative.”

Stam mentioned an increase in teacher retirement as a big reason for the increased resignations. True that 142 of the 612 mid-year resignations were taking early retirement — experienced teachers leaving the profession.

Where’s the good news in that?

Regardless of the claims of school officials, politics almost certainly played in to the press conference.  Teacher raises will be part of the General Assembly’s (re-election) business this term, even though the newly adopted state tax plan leaves little room for higher salaries for NC teachers.  Governor Pat McCrory (Rep) has proposed a $2000 raise for first year teachers, quickly touting the $200 million it will cost tax payers.

Underwood Elementary has lost five teachers this year.  Two had lost their homes to foreclosure and one was living on food stamps.

As we lose record numbers of experienced professional educators, the number of students entering the UNC system’s schools of education declined 7% in 2013.  Raleigh’s North Carolina State University expects 18% fewer enrollments this year in its school of ed.

There is simply nothing good about this –

..unless dismantling democracy-born public education is the plan of a conservative government–supported big business desire to turn our children’s education into a profit-driven market place.