I’m sitting on the shuttle bus now, only a few blocks from the Courtyard where my wife and I are staying. The chatter is wild and expressive as is the buzz of energy that this event sparks. Boarding are educators from across the country and around they world. They’re all here to learn and to be energized. The buzz of anticipated energizing will grow to a roar by the end of the conference on Wednesday. Im only here for a couple of hours, hoping not to be confronted by officials checking for badges. Hopefully my deaf-mute act will release me. My plan is to hang out at the Blogger Cafe, a comfortable corner for bloggers to sit and compose or just geek out with each.

My reason for coming, other than visiting one of my wife’s favorite cities was to attend the ISTE Leadership Luncheon. There, I had the honor and privaledge of sitting with Chris Lehmann. To learn more about this weirdly energetic education innovator, read my upcoming book. The bus is arriving, so I’ll write more later. im in and it’s a sea of people, all educators, moving in currents with no apparent purpose, but certainly directed toward opportunities to learn. They’re educators who are not satisfied with business-as-usual. They are comfortable with discomfort. They see technological, social, economic and cultural chang, not as a challenge to be feared and ignored, but as emerging opportunities to better prepair their students for their future — to own their future. More later… 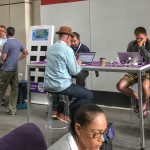 It‘s about an hour-and-a-half later. One of my best buddies, Kathy Schrock came over and we shared stories from years past and about our children who are around the same age. If you buy my upcoming book, you’ll learn much about Kathy. Steve Dembo also came over. He was the first educator podcaster that I knew, and a dynamo presenter. Steve is also a drone enthusiast. 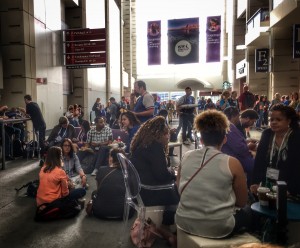 The flow of educators has not eased, even though presentations have begun. Around me, people are standing and sitting talking and learning. In many ways, the best learning at these conferences happen between sessions, in the hall, in conversations with educators from different states or nations.

Much can be said about education today that is not good. Most of our children are being schooled, but they are not being prepared for a rapidly changing future. It’s the people in this conference center who are trying to change education, and they’re doing it with brilliance, dedication, perseverance, and with enthusiasm. They are my tribe.

Now that I’m in the quiet of the Chicago airport, on my way back to North Carolina, I want to share my concern for education in the U.S. The people who are attending  ISTE, those I know and most of those I do not know are there for the sake of the future. Their eye is on the future. Part of it is the glamour of education technology — all the shinnies. But most of their presence and energy comes from a mutually held belief that by empowering student learning with information technology we are going to accomplish peaceful and prosperous in our future.  It will happen because we have become more tolerant, more compassionate, more inviting of different cultures for the sake of how they change us, and more willing to adapt our economic system to build a more inclusive society. We will predict and then learn that a country without poor people is a much better place to live.

Its hard to imagine such an America today, because the US is led by a man who continues to run for president, setting policies based on what got the biggest crowds during his campaign rallies. He addresses issues on the most simplistic levels ignoring the nuanced complexities of a country with 326 million people, 263 million of who didn’t vote for him.  He thrives on chaos and shuns the serious informed thoughtfulness that is necessary for leadership in this potentially wondrous time when almost anything is possible. He is a bully and he’s a fake.

..and I hold education responsible. I do not blame individual teachers and principals, except in as much as we have allowed public education to be corrupted into a standardized and mechanized institution for preparing future workers.  Instead, our job is to help our children learn as much as possible about their world and learn to