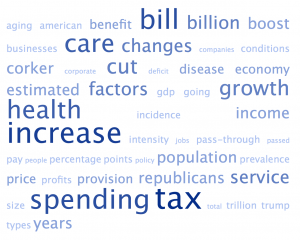 At the end of last year, our government gave away $2 trillion in federal revenue over the next 10 years, most of it going to the rich and corporations, especially the real estate industry thanks to last minute tweaking of the bill.

NOW congressional leadership is worried about debt and deficit. Paul Ryan said, “We’re going to have to get back next year at entitlement reform, which is how you tackle the debt and the deficit.”

He went on to say, “… it’s the health care entitlements that are the big drivers of our debt, … that’s really where the problem lies.”

Our Speaker of the House is talking about Medicare and Medicaid and I think he gets it partly right. I base that on a recent article (http://53eig.ht/2DkPugh) from my favorite data journalists at FiveThirtyEight, whose news comes from the numbers instead of manipulative rhetoric.

He’s partly right in that aging and income are only partly responsible for rising health care costs – and that’s a small part. According to a recent study from the Institute for Health Metrics and Evaluation, health care spending increased by $933.5 billion from 1996 to 2013. However only…

$133.3 billion came from increased population,
$269.5 billion from an aging population,

Disease prevalence and incidence resulted in a 2.4% reduction in spending while service utilization had no statistically significant effect at all.

The lion’s share came from price and intensity of service, accounting for $583.5 billion of health care spending. That’s pricing for prescription drugs and hospital mergers that reduce competition, among other factors.

The problem is not who’s getting the health care or who’s paying for it. The problem is a health care industry that seems free to bilk the American economy at a rate of 17.1% of our GDP. That’s a higher portion than any other country, except the Marshall Islands, who’s portion has shrunk from 30.8% (1995) to 17.1% (2014).

They need to address the health care industry, not who’s entitled to it.