I woke up early again this morning, all worried about this upcoming election. I started mucking around my old 2009 Macbook Pro and found the Federal Elections Commission web site and their downloadable files with details on campaign contributors by state. Data makes my skin tingle.

So I downloaded all 27 megabytes of North Carolina data (4/15/15-10/31/15), loaded the csv file into Open Office Calc and started tinkering. My seven year old MacBook was huffin’ and puffin’.

One of the questions that got my mind going this morning was the money that is so essential to political campaigns today. To date, the 2016 presidential campaigns have generated $1,000,058,201 from individual donations alone. More to the point of my sleeplessness was, “Who’s paying for these campaigns?” or “Who’s buying our government?”

What struck me as especially critical to my worries was the total amounts of campaign money generated from each category. Look at the data and graph. 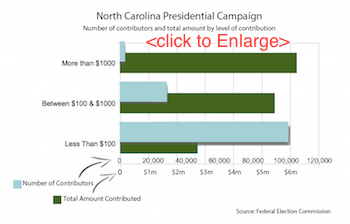 What’s wrong with this picture? Well, let’s say you are an incumbent, or even a challenger. With so much money out there, constituting a elections industry, the only way that you can keep your seat, or oust the incumbant is with a lot of money.

Where do you go for the money?

Look at the diagram again. Where’s the money? To get elected, you have to convince rich people and corporations to contribute. What will they want from you for that money?

It’s their government.  Not ours.