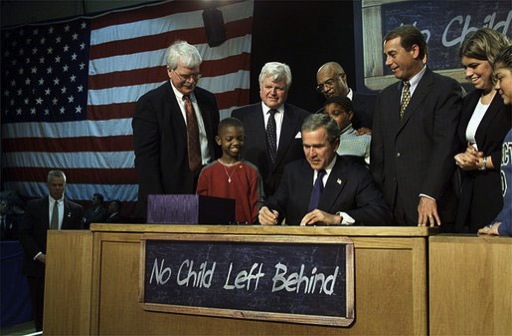 On January 8, 2002, George W. Bush signed into law, the No Child Left Behind Act. For 5,084 days, the United States has engaged in despicable acts of child labor, forcing its children to slog through physically and emotionally harmful toil and stresses, for reasons that have nothing to do with what was best for them.

We have speculated about the intent of No Child Left Behind, a title that exemplifies political PR’s employment of the english language to “..make lies sound truthful and murder respectable.”1 Our speculations have varied into the realms of conspiracy, going so far as to suspect an all out effort to kill public education in America. We have delighted in our own retitling of the law, my favorite being, “No Child Left able to Think for Him Self.”

Of course, returning education to the hands of parents, teachers, states and school boards is not a solution. It is an opportunity for courageous and inventive educators to seise. So here are some suggestions from one in a minority of educators, who actually remember classrooms unconstrained by policy compliance and political accountability.