My son and I went to Charlotte on Monday to watch the Bobcats’ final game. It was game four of the playoff series with the Miami Heat. It was an unfortunate pairing. If Charlotte had come in 8th or 6th place in the conference, they would have been playing teams that they could beat. But the Heat? The generous predictions gave the Cats one game. But the Heat is just too strong. Monday night, I watched our team, which was outmatched in almost every way possible, keep up with last year’s NBA Champions, with what could only be described as pure and unbridled heart! 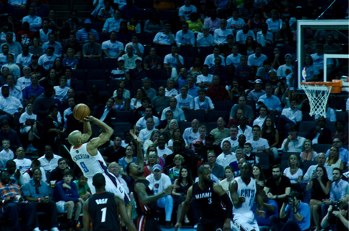 My point in writing about this here is to say that if you had handed me the above paragraph three years ago, and suggested that I’d write it in April 2014, I would have ask you for what you've been smoking.

I was a player when I was young, with some talent in baseball and football. I wasn’t exceptional, by most measures, but I won first place in the NFL’s Punt, Pass and Kick competition in my town two years straight and 3rd place after that. I loved playing football and baseball, but I never picked up basketball. I was never very fast and have always had difficulty getting both of my feet off the ground at the same time 😉

That said, I was never a spectator. I’ve never enjoyed watching any sport and have never been interesting in the whole jockese, sports-talk experience. I followed NCAA college basketball off and on, but only to an extent necessary for anyone who lives this close to Duke, UNC and NC State – but I always thought of professional basketball as lumbering giants brut-forcing their way to baskets and championships.

This all changed about three years ago, when my wife and I found ourselves watching YouTube clips of NBA games, narrated expertly and compellingly by our son, Martin. Like me, he had never had any interest in sports as a topic. He played in the band, and at the high school he attended, it was the band-geeks who were the cool kids on campus, not the jocks.

But Martin has an amazing ability to take a topic of interest and very quickly master its facts and concepts and be able to talk about it with people who have been immeshed in the matter for years. He inspired us by sharing professional basketball’s sights and sounds, and more importantly, its personality.

The magical slight-of-hand of Ricky Rubio,

The sublime grace of Kevin Durant,

The fierce tenacity of Nate Robinson,

The unassailable concentration of Tony Parker,

The passion that can be evoked from that too weird face of Chris Bosh,

And the superhuman athleticism of Lebron (king) James.

We became interested and then passionate, and finally increasingly knowledgable about professional basketball, because of what our son conjured up for us. I understand much of the world around me, because I can identify with what I see. I can mentally put myself in the shoes of people and surmise their perspective. But what I see in most NBA games, I can not feel in my own muscles and this is compelling to me.

Our son provoked us by exceeding our imaginations.

Software can’t do this!

Government standards can’t do this!

Corporate models and for-profit schools can’t do this!

Only a skilled and inspired teacher can do this!

Only the “art” of teaching can inspire us by exceeding our imaginations!