Those who have seen my “Cracking the Code of the ‘Native’ Learning Experience” presentation are familiar with my theory that we have become a more playful society. We spend our cognitive surplus in more interesting ways than ever before. 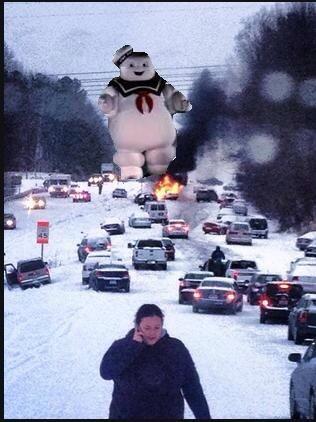 Here is more evidence, a photo taken down Glenwood Avenue, just minutes after Brenda and I had driven through last Wednesday on our way toward a hotel near the Raleigh-Durham Airport. WRAL.com invited people to playfully add to the photo.  You can see a slideshow of the photo manipulations here.

This part was not fun.  Often, when snow is in the forecast and I’m flying out, I’ll stay in a hotel near RDU the night before so that I’m only a shuttle-ride away the next morning. It had only just started snowing when we left the house for what is usually a fifteen minute drive. Shortly after riding and pushing our sedan up and down Glenwood Avenue and seeing the gridlock that had already formed in the in-bound lanes, we decided that she would not be able to drive back home. So we went straight to the airport, parked the car, and set out looking for taxis, one to take her back to Raleigh and one to take me to my hotel. The hotel shuttle had stopped running, as had the contracted airport Lincoln Town Car taxi service.

Smaller taxi companies had come to the rescue, older green and yellow and electric red cars and minivans, mostly from Japan and driven by young men with exotic accents. Brenda got one of the early ones, headed for North Hills. I got one of the next ones, delivering folks to airport hotels. After two hours of pushing, both ours and many other cars around us, I was in my room, and after another hour, Brenda had been let off at North Hills, from where she walked the remaining mile+ to the house, and lucky to do so.

The next day, I learned that my flight, one of only two leaving RDU that day, had been delayed until 12:00 noon, messing up my connection in Atlanta. Lacking the confidence change my connection on the web (Brenda does that stuff), I called Delta to do the rescheduling for me and I got a new itinerary, keeping the first class seats Brenda had paid extra for out-of-pocket. 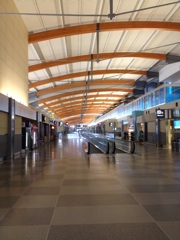 I took an early yellow and green cab to the airport, planning to spend the morning in the Delta Sky Club. It hadn’t occurred to me that the lounge might be closed for the snow. No problem though. We had the rest of the airport to relax in.

The plane out of Raleigh, which had been parked there for two days, ended out leaving around 2:00 PM, because they’d waited until nearly noon to start preparing it, as even the engine needed de-icing. Trying to board with a 1st class boarding pass, I was informed that they didn’t have me listed in their manifest, that the Delta agent I’d spoken with on the phone had mistakenly canceled that flight. They gave me the last seat left, 16A, right next to a Duck Dynasty-looking fellow with a sleeveless shirt and tattoo on his shoulder that said M-R-Ducks. The part about the tattoo a bit of an exaggeration, but the rest of this is true.

Of course my delayed delay out of Raleigh caused me to miss my rescheduled flight, but on landing in Atlanta, a very friendly agent told me that I had already been rebooked on a new flight, leaving in an hour and a half. I walked over to the Delta Ski Club there, only to discover that it was more crowded than the concourse. So I spent 45 minutes in the lobby of the club, talking with Brenda on the phone.

The flight on to Louisville was without incident and I was lucky enough to grab a Ford Fusion Titanium to drive over to the hotel. The next day my talks at the Sacred Hearts Campus in Louisville went very well, such a gracious audience, and thankful too. Brenda and I both had been keeping them updated on my adventures of the previous two days.

Flying out of Louisville the next day was only slightly complicated by more snow during the night, the slight delay leaving me only ten minutes to get from gate B24 to gate A20 for my connection in Atlanta. I made it, though I’m sure that at my age and size, running all that distance with luggage was not a pretty site.

The good news is that every once in a while, I will have a trip like that, where everything that can, does go wrong. And then, I’m charmed for the next 24 months or so.

So, may the remainder of my speaking trips be without incident, and leave me with only the best memories of this professional life as a vagabond educator.