The National Science Teachers Association (NSTA) will be holding a conference this week in Charlotte, The Queen City of North Carolina.  It is both ironic and opportune for science teachers, from around the country, to converge on my state to celebrate science education and to learn more about their chosen passion and techniques conveying it to their students.

I had planned to explain this event’s importance as part of my address to the audience.  But, alas, I’ll have only 45 minutes, so will be getting right to business.  Instead, I’ll explain it all here, sitting in a Raleigh coffee shop, and proud to be a citizen of this state that owes so much of its recent success to science and education – and a state that desperately needs to be snapped out of its stupor.

Dazed by $80,000,000 worth of campaigning in 2012 (“Follow the money,” 2012), we have witnessed an arrogant government, in effect, vilify science and education.  Helping to spur this backward thinking is John Droz, a retired real-estate investor and  fellow with the American Tradition Institute (which is tied to fossil fuel interests). In a recent presentation [a Droz slidedeck] to the General Assembly, he called smart meters “fascism in a box” and environmentalism a “new world religion backed by the United Nations.” Among his cited sources were,

Whistleblower, the monthly magazine companion of WorldNetDaily  a website that promotes conspiracy theories about topics such as President Obama’s citizenship; Quadrant, a conservative Australian magazine that was involved in a scandal over publishing fraudulent science  and the Institute for Creation Research  a Texas outfit that rejects evolution and promotes Biblical creationism and the notion that “All things in the universe were created and made by God in the six literal days of the Creation Week.” (Surgis, 2013)

Also carrying some influence is John Skvarla, the newly appointed Secretary for the state’s Department of the Environment and Natural Resources.  He apparently believes that oil is a renewable resource, saying “The Russians for instance have always drilled oil as if it’s a renewable resource, and so far they haven’t been proven wrong.“

And then there are the legislators of 20 coastal counties, where developers have been stifled by the notion of sea level rise. So to make things better for developers, They introduced a bill that outlaws the rise of the sea, or at least how it’s measured. From House Bill 819, Section 2. 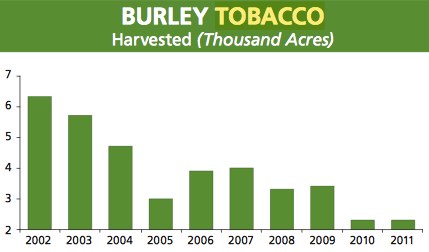 This whole business prompted comedian, Stephen Colbert to say on the air, “If your science gives you a result you don’t like, pass a law saying the result is illegal. Problem solved.“

The dramatic decline in Tobacco farming in North Carolina, illustrated in this graphic (North Carolina Department of Agriculture), has meant an enormous hardship for rural NC. As part of Raleigh’s efforts to find a new cash crop, the Biofuels Center of North Carolina was established five years ago, researching, developing and testing a variety of crops biomass crops.

The center closed its doors last week.  The General Assembly cut the center’s entire $4.3 million budget. In the words of Steven Burke, the centers CEO,

There’s not much that a few thousand science teachers can do, except to be mindful that science is neither fact nor theology.  It’s a way of looking at the world, observing, hypothesizing, predicting, testing, evaluating and adapting.  It is both personal and social, and following someone else’s standards for what’s to know (to be taught) is as repudiating to what science is as outlawing the results.

I look forward to seeing many of you at the NSTA conference this week in Charlotte.  I’ll be in Convention Center, Ballrooms C&D at 2:00 on Friday afternoon.