What was at the core of much of my advocacy for retooling education came from a condition that can best be illustrated by the Knowledge Doubling Curve. Recently adjusted by Faras Batarseh of the London School of Economics, it states that Until 1900, knowledge was doubling roughly ever century. However, by 1950, it was doubling every 25 years. 2000 saw it doubling every 12 months. Today, says Batarseh, “knowledge is doubling every day.”1

There are a number of logical reasons, but it leads to a society that is plagued by VUCA.

Change is the new normal and there is not a single area of study or interest that is not in affected..

Change has embowed a new significance to the word, current.

Public school instruction can no long afford to lag decades behind what is known today about science, health, mathematics, philosophy, and even history. It’s the reason I use to say (back when people were paying attention to what I had to say.)

We need to stop teaching students how to be taught, and start teaching them how to learn for themselves.

We will have achieved real education reform, when no teacher believes that they can teach the same things, the same ways, year after year; and when we are providing them with the resources and the time to retool their classrooms every day.

For this technology-rich and information-driven world, the best thing we can be teaching our children is literacy – learning-literacy.

1Batarseh, F. A. (2017, September 21). Thoughts on the future of human knowledge and machine intelligence [Web log post]. Retrieved from https://blogs.lse.ac.uk/businessreview/2017/09/20/thoughts-on-the-future-of-human-knowledge-and-machine-intelligence/

I will be producing little 2-minute videos over the next few weeks to promote my new book, The Days and Nights of a Quiet Revolution.  This first one sets some context.  When I was in high school, computers were giant machines that were installed with forklifts.  My father use to take me to his work, a trucking company, to show me their Honeywell computers.

Even after I graduated from college, computers had nothing to do with education.  I had no reason to believe that teaching would be changing in any substantial way over my assumed 30 years as a history teacher. 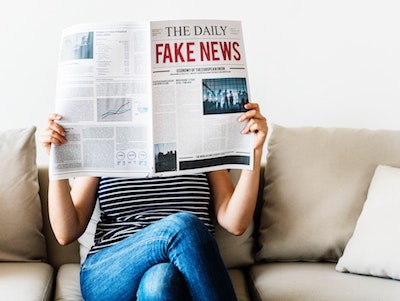 This was my first computer, a Commodore VIC-20. It had 3.5 KB of memory. That’s 18 million times less memory than the iPad I’m typing this on now. I used a cassette player to store programs on tapes. One of the programs I wrote helped me with cooking. I would get home in the afternoon from teaching a couple of hours my wife’s accounting job. So I would select the dish I wanted to cook and the time that I wanted to serve it. The program would list the ingredients, which I gathered, measured and chopped. Then each time an action was required in the preparation the computer would buzz and I would do it, and then get back to grading papers. When my wife got home, our chili, stuffed peppers, vegetable soup or Mac & cheese with tomatoes and sweet peppers was done and on the table.

(One of many such stories in A Quiet Revolution [https://goo.gl/T3o5e8])

Here is something from my seemingly endless preparation of The Quiet Revolution.  It’s a story that I often related to audiences to illustrate the changing nature of the information that we are using today and our need to redefine literacy. 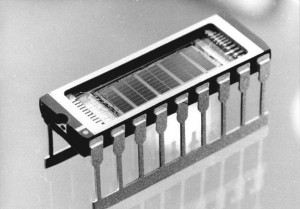 There was a study conducted by the University of California at Berkley called “How Much Information.” They discovered that the world generated five exabytes of information in 2002.

You are probably thinking,

“If I knew what an exabyte was, I’m supposed I would be impressed.”

To clarify, if we added five exabytes of information to the Library of Congress, the largest library in the world, it would require the building of 37,000 more Libraries of Congress to hold that year’s additional information. The kicker, however, is that only one one-hundredths of one percent (00.01%) of that information ever got printed. All the rest of the new information was digital, existing as 1s and 0s and residing on the memory cells of magnetic tape, disks, optical discs and integrated circuits; and requiring digital technology and technology skills to access and use that information. If more and more of our information is digital and networked, then we can take the paper out of our future workplace.

There’s been a question, trying to form in the back of my head, like an itch I can’t reach, concerning our investigation of Russian meddling in U.S. elections. I do worry about Trump’s possible collusion with a foreign power and the corruption it would imply – though corruption seems to be the way of things in our capitals these days. 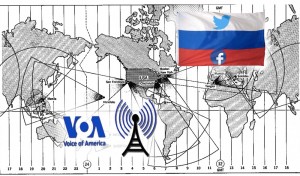 I found that itch yesterday, as I was talking about it with my wife — and here it is.

There is an important difference, I believe. VOA sought to “win the attention and respect of listeners” behind the Iron Curtain by offering a “consistently reliable and authoritative source of news.” (Words from the VOA Charter of 1959.)

We wanted to help intelligent people in the USSR, to recognize true news and reject the Soviet propaganda.

Russia, on the other hand, wants to appeal to unintelligent Americans’ willingness to believe sensationalist propaganda and reject true news.

Perhaps, rather than investigating Russian meddling, we should be investigating education policy that wants students to memorize the right answers to questions, instead of teaching them the discipline of asking questions and the wisdom to question the answers. 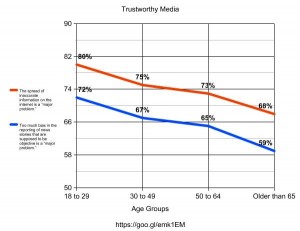 I recently ran across a Gallup/Knight Foundation survey entitled American Views: Trust, Media and Democracy.  The poll of more than 19,000 U.S. adults aged 18 and older attempts to measure how our changing information landscape has affected media trust in the U.S. and made it harder for the news media to fulfill their democratic responsibilities.  It is important to note that Trust, Media and Democracy was a nationally representative mail survey.  So a back-of-your-mind question should be, “Who took the trouble to share their views by mail?”

That said, a couple of things especially caught my attention.  First, it seems that younger respondents were more likely to consider the intentional spread of inaccurate information over the Internet and bias in the media to be a “Major Problem.”  See graph 1.

It leads me to wonder if we (educators) did a better job than we thought, over the past 10 to 15 years, of teaching our students to be critical media consumers.  Or perhaps it’s a result of a generation who is, unquestionably, more net-savvy than their elder.  Regardless, we have more work to do. 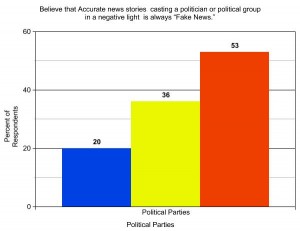 What disturbs me is how many people do not really know what “Fake News” is.  Wikipedia defines it as

..a type of yellow journalism or propaganda that consists of deliberate misinformation or hoaxes spread via traditional print and broadcast news media or online social media. Fake news is written and published with the intent to mislead in order to damage an agency, entity, or person, and/or gain financially or politically, often using sensationalist, dishonest, or outright fabricated headlines.. (Wikipedia)

That pretty much aligns with my own understanding of “Fake News.” Yet 20% of Democrats believe that an accurate news story that casts a politician or political group in a negative light is “Fake News.” The percent is higher for Independents and Republicans. See graph 2 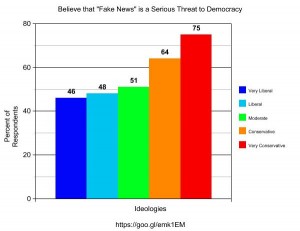 This one surprised me, that the more conservative a person is, the more likely they are to consider “Fake News” to be a serious threat to democracy. See graph 3 and please explain this to me.

There is much more available through the PDF report, which you can download at: https://goo.gl/emk1EM

I created the graphs from the survey data using Create a Graph from the Department of Education web site.

I remember one particular week when my daughter was trying to learn the nine types of nouns for English class. She would be tested at the end of the week on her ability to label them in given sentences. Although she was a serious and conscientious student, my daughter struggled with some types of learning, especially memorization. She spent evenings that week, heroically and sometimes tearfully trying to distinguish common nouns from proper nouns, from collective nouns, from verbal, compound, abstract, concrete, countable and uncountable nouns.

Meanwhile, with our attention firmly directed to our her efforts, our son was left to his own devices. He was less academically challenged, but far less serious about school work and spent that week playing a newly-rented video game. Without the manual, he had to trial-and-error himself into the game’s dynamics. He failed and succeeded, made observations, formulated hypotheses, tested his hypotheses and constructed a mental toolbox of strategies so that he could play the game and save the damsel or slay the dragon – or whatever the goal was.

That week of watching my daughter struggling while my son played left me wondering, “Who was engaged in the learning that might be most appropriate for their future? Was it my daughter, who struggled to memorize the qualities of nine types of nouns, or my son, who was teaching himself how to play a complicated video game?”