Much has been written lately about the dramatic increase in eBook buying and reading, and the decline of paper-based books. But Amazon, at least largely responsible for this trend also is in a position to tell us more about how we read and who’s doing it. The ecommerce giant just released a list of the top 20 well-read cities in the U.S., since January 1, 2011. Here’s how they made the list. The Next Web reports here:

Well, by compiling sales data of all book, magazine and newspaper sales across all formats – in digital and print – since Jan. 1, 2011.

Amazon.com included cities with more than 100,000 residents and it was calculated on a per capita basis. So who came out on top? Cambridge, Massachusetts, of course. As home to the prestigious Harvard University and Massachusetts Institute of Technology (MIT), Cambridge also topped the list for reading the most non-fiction books.

Boulder, Colo., lives up to its reputation as a healthy city by topping the list of cities that order the most books in the Cooking, Food & Wine category. Whilst Alexandria, Va., residents topped the list of the city that orders the most children’s books. Florida, the sunshine state, was the state with the most cities in the Top 20, with Miami, Gainesville and Orlando making the list.

So the top 20 most read-cities are:

Seth Godin recently wrote a post about the future of the library and of librarians. It’s an interesting question, “What’s the purpose of a library and it’s keeper, when virtually all of the information we need on a daily basis is just a mouse click, or touch away?”
He writes..

Want to watch a movie? Netflix is a better librarian, with a better library, than any library in the country. The Netflix librarian knows about every movie, knows what you’ve seen and what you’re likely to want to see. If the goal is to connect viewers with movies, Netflix wins.

The library is no longer a warehouse for dead books. Just in time for the information economy, the library ought to be the local nerve center for information…

With some uninterrupted days at home, I have been tinkering a bit with Citation Machine. I’ve been intrigued with the feature of many apps and browser extensions where you simply click a button and the desired text is automatically copied into your computer’s clipboard, ready to be pasted where needed. URL shorteners have been especially benefitted by these features.

So I started researching the code that enables this, and found that what typically works with Firefox, Safari, Opera, etc. will not work with Internet Explorer (IE), and what works with IE is ignored by the other browsers. So I also had to research the code that enables Citation Machine to detect the type of browser that is being used, so that the proper code can be included for the click to copy function.
It seems to be working now and I have installed it on all of the MLA and APA formats.  There is some programming that I have not yet done for Turabian and Chicago that would be necessary to include C2C functions.  It works like this:

You have to continue to do some editing after you paste the citations, deleting out the titles and italicizing sections indicated by the instructions, but I suppose that you are in more of an edit mode of thought and action when you are in your editor or word processor than you are when using your web browser.
If you have comments or suggestions, place leave a comment on this blog entry.

I finally went out and bought the book — MLA Handbook for Writers of Research Papers: Seventh Edition. I’ve completely redone all of the citation templates and you may notice some minor changes in the format of the page, but nothing major. Hopefully, you will notice some performance increase, though the map may be slowing things down. I may remove that. It’s just cool to see who’s hitting this thing.

Now somebody is calling for the AMA format. I hadn’t even heard of that one. But I may just add it in.

I have almost three weeks off from traveling, and I have spent the first part of that, the afternoons, updating APA to the Sixth Edition Publication Manual of the American Psychological Association (APA). I also took the opportunity to rewrite a lot of the code that generates the APA citations so that the tool will run much faster (theoretically).

I know that there will be questions. There have already been questions:

..for example why was the Web Pages heading dropped from the APA format???

I had to make a number of calls and dropped a couple of sources because I simply wasn’t comfortable adapting citations the way that I have in the past. Dropping Web Pages was a tough call. But there simply was not a citation format described in the manual for “web pages.”

Most of the non-print sources, however, do include textboxes for web URLs as well as Digital Object IDs (DOIs). So you can cite books, journal and magazine articles, online encyclopedia articles, weblogs, podcasts, online forums, and online conference proceedings as web pages. The impression that I got from the manual was that APA wants references to be established and easily verifiable resources.

If there are other sources that are missing here, please just comment on this blog entry. I will receive an e-mail notification and get to it as soon as possible.

Next step — go through and double check (and recode) MLA to 7th edition.

Last summer, The Modern Language Association released it 3rd edition of the MLA style guide. It takes affect this month (April 2009). There are two major changes with regard to citations.

Many of the follower of my 2¢ Worth blog, already know that we’ve added a second web server to the Landmarks setup. I guess we have a sever farm now, though it’s really more of a server backyard garden. But even at that, Citation Machine was stressed off and on through the end of the fall semester.

So, over the past few weeks of not traveling, I’ve been working on some new programming for CM that breaks it loose from the databases. Now, all of the coding is resident within the program itself and various config files. What this means is that it should run faster.

I have also added a new feature that is more of a beta offering, because I do not know how much it will stress the system. But for years, people have asked about the ability to have CM remember their citations for the sake of later bibliographies. Now you can do that, and here’s how:

Great luck to you!

You’ve likely noticed some happening with Citation Machine. If it has caused you any convenience or grief, please accept my apologies.

My main concern has been that efficient performance. With the end of the semester approaching and now here, the usage of CM nearly doubles, and I know that slow loads can be very frustrating.

So, a couple of months ago, I tried utilizing iframes in the code, something I hadn’t done before — and it worked quite nicely. When you click [MLA], and the list of content sources appears, that is the only information that is reloaded. Before, the entire page had to be reloaded. When you clicked a source to be sited, and the web form appeared asking for info on the source, then that form is the only thing that is loaded.

The problem that emerged was that although my Windows computer (a Mac Intel machine) ran the new tool just fine, many people wrote in indicating that these new features were not loading at all — rendering Citation Machine useless.

I write in some workarounds, that would recognize Windows machines, redirecting them to non-iframe versions of the Citation Machine, which meant that I was maintaining multiple versions of the tool. The workarounds thickened the programming and caused more problems, nececitating more workarounds and more coding. It finally got to tedious to work with.

So I got up early yesterday morning and started a complete re-write of Citation Machine, using Cascading Style Sheets, something I’m doing more of — finally. Pulling in working modules from the earlier versions, I seem to have finished it after another early morning codathon (3:00am to 7:50am).

Version 5.0 seeks to solve both the problems of slow loading and complexity of the code. To address both of these problems, Citation Machine will now offer either the menu of citation styles and sources, or the web form or completed citation — rather than loading both the menu and the forms with each mouse click. The significantly simplifies the code and page loads should be nearly as fast as with the iframes.

Please let me know if the new version causes any problems. 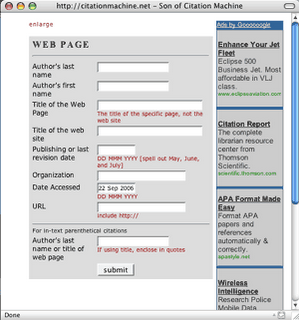 I use Citation Machine all the time, mostly to cite images and other sources for my blog. A problem that has pestered me over the months is that the CM window is so large. I’m constantly having to move it around on the screen so that I can find the information on the web page that I need for the citation.

So to solve the problem, I’ve installed a new button in the top menu, [Shrink]. This button will remove the top banner and the left menu (assuming that you’ve already chosen your citation style, and reduce the size of the window so that it doesn’t cover up as much of the digital document you are citing. Google Ads remain. I have to pay for my children’s college somehow.

An additional link will appear, [enlarge], that will pop the window back out to size with the banner and the main menus.

My apologies for Citation Machine being down over the last couple of days. I have moved the pages over to my new dedicated server, and there was a glitch in moving the domain name. Dreamhost released it, but there was a problem in my configuration that prevented Rackspace from catching it. Cleared up now, over a phone call from my breakfast table in Asheville yesterday. I love phone support.

There’s obviously a lull in citation machine usage right now and I’ll be spending part of this time featuring Son of Citation Machine out. I think you’ll be pleased.