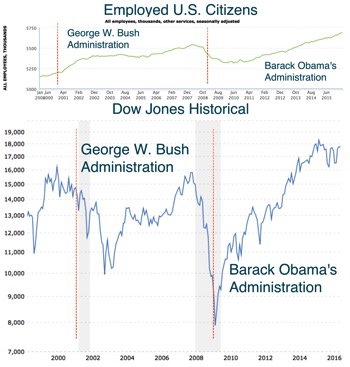 My questions first: 1) Where are U.S. citizens getting misinformation? 2) What do the liars have to gain by misinforming us?

According to a May 11 Public Policy Polling press release, 43% of voters believe that unemployment as increased during Obama’s presidency.1 In truth, there are more U.S. citizens employed today (April 2016, 5,867,000) than at the highest employment period of the GW Bush administration (April 2008 5,540,000) – this from the U.S. Bureau of Labor Statistics. The first graph shows a devastating dip in employment during the first months of Obama’s presidency, but that was clearly a result of the banking debacle, which happened before his inauguration.2

PPP’s polls also indicate that 32% of voters believe that the stock market has declined during the current administration.1 Again, this is untrue. Microtrends’ historic charts for the Dow Jones indicate that the previous administration enjoyed a high Industrial Average market index of 15,811 in October of 2007 – only 1,070 points above the value on his first day of office. The highest index during Obama’s two terms was 18,314 on February, 2015 – an increase of 9,329 points above its value on the first day of his presidency.3

Again, Where are U.S. citizens getting misinformation? .. and what do the liars have to gain by misinforming us?